Try To or Try And? 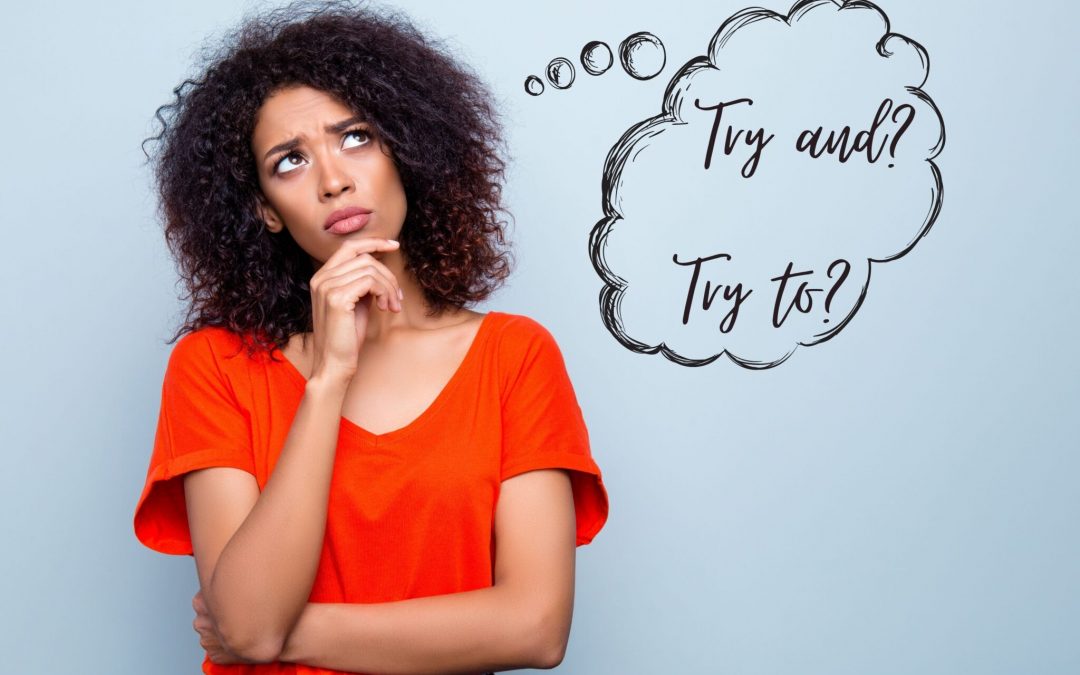 Have you landed on this page to “try to” improve your understanding of English grammar and usage—or to “try and” do so? Either way, you’ve come to the right place. The focus here is on whether “try to” and “try and” are both considered correct and are, thus, interchangeable.

Also, if we knew for certain that we would leave early, we would simply say “we will leave early.” To say that we are trying to leave early allows for the possibility that we may not.

On the subject of “try to” and “try and,” M-W contends that because the expression “try and” has appeared in published works for as long as (if not longer than) “try to,” we can feel free to use it. Such an argument makes sense if we’re talking about the evolution of a word’s definition or the acceptability of, say, starting sentences with and or but. However, the argument becomes specious when it stubbornly privileges frequency of use over precision.

Consider, for example, the lack of logic in these sentences:

The trustees will “try to raise” the money but may fall short. Would-be toddlers may “try to walk” early but will often fail. In the space race, Musk and Bezos can “try to beat the other,” but only one can be first.

M-W goes to great lengths to prove that the latter is a very old construction—older, perhaps, than “try to”—claiming, it seems, that an illogical construction somehow magically becomes more logical over time.

Would We Ever Say “Attempt and”?

One way to stress-test the expression “try and” is to consider how it would sound if we replaced try with a synonym—attempt, for example. When we do, the absurdity of the construction becomes even more apparent:

Longtime Get It Write readers know that the advice on this site fully acknowledges and takes into consideration the fluid nature of language. We must all be willing to change as our language inevitably changes. I’ve accepted (albeit grudgingly) the fact that nauseous is now synonymous with nauseated. I wholeheartedly defend the use of the singular they, their, and them in the absence of a non-gendered third-person singular pronoun in the English language. And I’m willing to concede (sadly) that one day whom will be relegated to the dustbin of antiquated words no longer in use.

But I’m digging in my heels on the issue of treating these two phrases as if they were interchangeable. Writers should always seek to be as clear and logical as possible, and in many cases, “try and” is neither clear nor logical.

What do you think? Get It Write newsletter subscribers and learners who have taken a GIW course (online or in person) may ask to join the GIW Facebook group, where we have lively discussions. And we welcome everyone to “like” the GIW Facebook page.