Hyphens, Em Dashes, and En Dashes: When to Use Them and How to Type Them 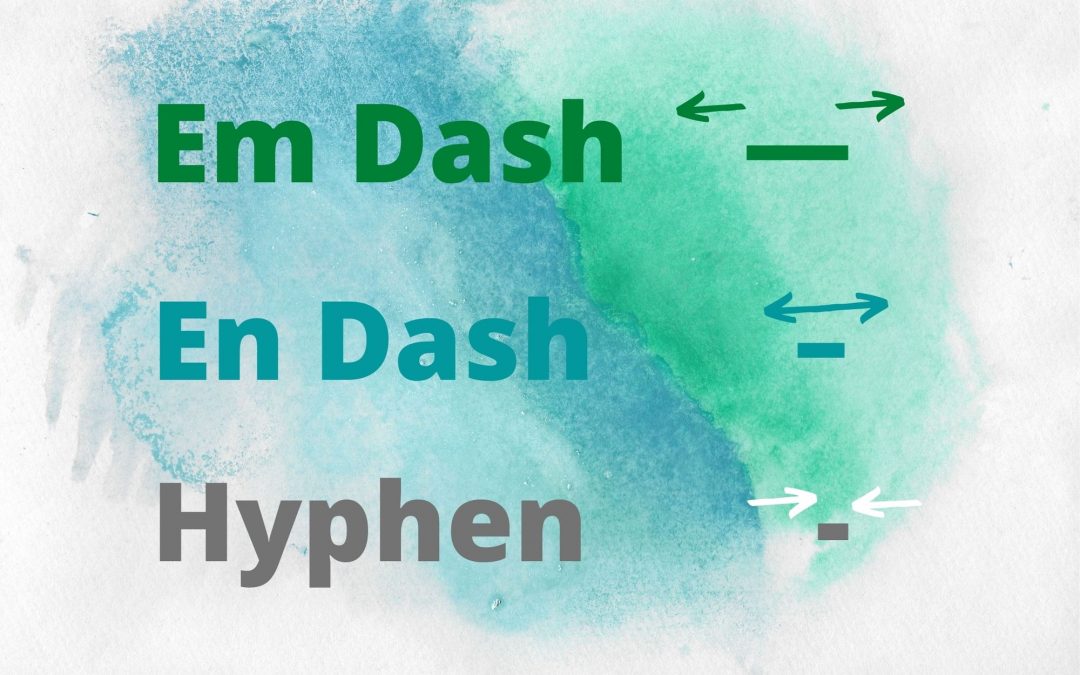 The hyphen, the em dash, and the en dash are all horizontal marks of varying lengths. Each functions differently from the others. Below we define each mark, explain when to use them, and provide instructions for typing them on both PCs and Macs. (View our new mini-lesson video on this topic.)

The hyphen is the shortest of the three marks, and we use it most commonly to combine words (making compounds such as “well-being” and “advanced-level,” for example) and to separate numbers that are not inclusive (in phone numbers and Social Security numbers, for example).

On computer keyboards, the hyphen appears on the bottom half of the key located on the top row between the “0” and the equals mark (=).

Correct hyphenation is often a complicated issue. Elsewhere on this site, we discuss the use of hyphens to create compound words and hyphenated adjectives. Here, however, our focus is on the two kinds of dashes.

When we hear the term dash, most of us picture the em dash. It is significantly longer than the hyphen.

We use the em dash to create a strong break in the structure of a sentence. We can use these dashes in pairs, as we would use parentheses—that is, to enclose a word, or a phrase, or a clause (as we’ve done here)—or they can be used alone to detach one end of a sentence from its main body.

Dashes are particularly useful in a sentence that is long and complex or in one that contains a number of commas, as in this example:

If we confuse the em dash with the hyphen, we make a sentence virtually impossible to read. If we had used a hyphen in place of each dash two sentences ago, it would seem as though we had hyphenated two pairs of words in the sentence: “tablets-all” and “course-for,” neither of which makes any sense.

A good rule of thumb is to reserve em dashes for those places where the comma simply doesn’t provide a strong enough break. If a comma (or a pair of them) works, use it.

The en dash is slightly longer than the hyphen but not as long as the em dash. (A common myth holds that the en dash is, in fact, the width of a typesetter’s letter “N,” whereas the em dash is the width of the letter “M”—thus their names. In fact, an em is a typographical unit of measurement.)

The en dash means, quite simply, “through.” We use it most commonly to indicate inclusive dates and numbers: July 9–August 17; pp. 37–59.

Many people were not even aware of the distinction between the en dash and the em dash until the advent of word processors, when software programs enabled us to use marks of punctuation that once had been available only to professional printers.

Important: Spacing with Hyphens and Dashes

When using the hyphen, the en dash, or the em dash, most—but not all—style books advocate putting space neither before nor after them. The Associated Press style (always the outlier) insists on spacing both before and after the em dash.

Typing the En Dash and Em Dash on PCs and Macs

Computer keyboards lack individual keys for either of the dashes. (The symbol above the hyphen is an underline, not a dash.) Before word processing, we had to make an em dash by typing two hyphens. Now we have options.

Note that not all keyboards around the world are the same. Our readers outside the U.S. tell us that they don’t have the following shortcuts on their keyboards.  That said, here are guidelines for typing on many keyboards:

British (and Canadian) Usage vs. American

British/Canadian style guides seem wildly inconsistent on the issue of the em and en dash. Some say to use the en dash instead of the em dash, while others go so far as to advocate using the hyphen, advice that would lead to confusion for readers, as we have noted above. Our British and Canadian readers—and, indeed, any English-speaking reader outside the U.S.—should consult the style manual to which they default.

The esteemed Oxford University Press style guide explains how to use both the em and en dashes, so we can assume that at least this authoritative source advocates using both.

Can you spot any errors in the use of the hyphen, the en dash, or the em dash in the following sentences?

Browse the archives to read dozens of other articles on this site. Subscribe to have an article sent to your inbox once a week.

Buy Me a Coffee