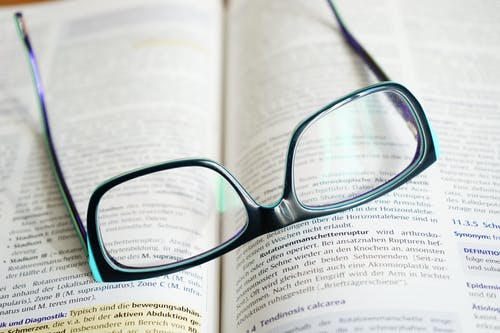 Word confusion and language-related lost causes are no strangers to this site. We have explored the lost distinction between the words nauseous and nauseating, the often-lost letter d in the phrases “used to” and “supposed to,” and lost awareness about the definition of including—just to name a few topics.

If you enjoy this article by Dr. Cooper, you may also enjoy his two earlier guest posts: “Get Off My Lawn! A Curmudgeon’s Rant about Sloppy Writing and Thinking” and “What Does It Mean to ‘Beg the Question’?”

In the Christian tradition, St. Jude is the patron saint of lost causes.* When it comes to English language usage issues, he certainly has his work cut out for him. If you are Catholic, perhaps you can render a prayer to St. Jude for the following six problematic locutions, items on a long list that I think of as lost causes:

“Each softball team is comprised of three adults and seven children.” This sentence should read “is composed of” or, better, “comprises.” “To comprise” is to embrace, and “to compose” is to build. So a set comprises its members, while the members compose the set. Properly speaking (aye, there’s the rub) nothing is “comprised of.”

“I think that candidate McGillicuddy is an honorable person, but some of her values just do not jive with mine.” The correct word here is jibe, not jive. Jive refers to loose or deceptive talk—think of the song “Jive Talkin’” by the Bee Gees. “To jibe” is to fit or agree, a metaphor borrowed from the literal meaning of the word jibe, a nautical term describing the (usually forceful) movement of a sailboat’s fore-and-aft sail or boom from one side to the other.

This distinction itself may be gone with the wind.

“I chose this dress for my wedding because it is so very unique.” Nothing is ever “so unique” or “very unique.” The word means one of a kind, and something is either unique or it is not. The word we need instead is distinctive, which means to stand out.

I find this mistake uniquely irritating.

“This company is facing so many financial issues that it is floundering.” Assuming the company won’t recover, the right word is founder, which means “to shipwreck.”

Merriam-Webster says that “to flounder” means “to thrash about wildly” or “to move about clumsily,” suggesting the possibility of recovery. I suppose we are to imagine that flounders struggle to swim, but they in fact swim quite gracefully, gently fluttering their fins. (Perhaps a better definition for flounder would be “to have one’s eyes move to one side of one’s face,” eh?)

“Charlie is making his famous barbecued shrimp, and I’m so anxious to eat!” The word here should be eager. To be anxious is to have anxiety, so if you are worried about the freshness of Charlie’s shrimp, then you may indeed be anxious. But if you are looking forward to the meal, you are eager.

I am so eager to see this confusion disappear, but in fact the issue just makes me anxious.

You have another think (vs. thing) coming

“If you think I’ll support you on this issue, you’ve got another thing coming.” In fact, what you really have is another think coming.

This phrase is supposed to be something of a joke. You are supposed to make a mental switch between expecting thing and then recognizing that you actually heard think, which is not otherwise used as a noun. Come to think of it, you always have another thing coming no matter what. Isn’t that life, one thing after another?

Regular readers of Get It Write know that one important tenet in the philosophy of this site holds that that language evolves through popular usage. But another significant tenet is that language should strive to be precise and clear.

My concern is that some of these lost causes might lead to less clarity: at least in some cases, the original terms were more precise.

Then again, a lost cause is just that—lost. St. Jude has a pretty easy job, leaving the teeth-gnashing to curmudgeons like me who just can’t, as my wife often tells me, let it go.

*According to Christian scripture, Jesus had four brothers, one of whom was named Judas. By Christian tradition he is considered the author of the New Testament Book of Jude, and he is often associated with the disciple Thadeus. For Catholics, he is St. Jude. Unfortunately, his name creates confusion with another Judas, namely, Judas Iscariot. This confusion may account for his being the patron saint of lost causes. For more information, go here.

In addition to being a Get It Write guest writer and resident language curmudgeon, Dr. Ron Cooper is a senior professor of philosophy at the College of Central Florida in Ocala, Florida. Also a novelist and poet, he recently won a Florida book award for his latest novel, All My Sins Remembered (https://www.goliadreview.com/the-catalog). In addition, he is an amateur bluegrass musician who challenges anyone to play and sing worse than he does. See also Dr. Cooper’s two earlier guest posts on this site: “Get Off My Lawn! A Curmudgeon’s Rant about Sloppy Writing and Thinking” and “What Does It Mean to ‘Beg the Question’?”