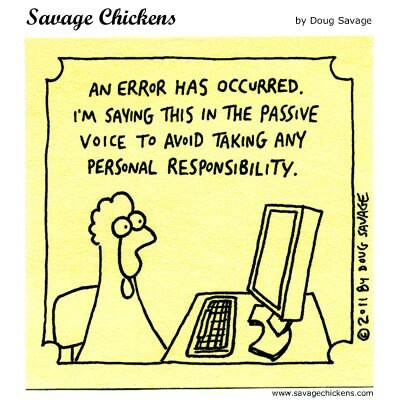 Those of us whose word-processing software includes a grammar checker have probably encountered the green squiggly line of doom wagging an accusatory finger at a passive verb. But what is the passive voice, and why is it considered undesirable? (If you learn better by hearing and seeing than by reading, watch our video on this topic.)

In the passive voice, the subject is also the recipient of the verb’s action.

Simply put, when the grammatical subject of a sentence is also the recipient of the action expressed by the verb, the sentence is in the passive voice.

Let’s use these sentences for our discussion:

What is the active voice?

In the first sentence, was kept is the action verb. The subject of the clause is parade. But what makes the sentence passive is that parade is also the direct object. When we ask ourselves, “What was being kept?” the answer is parade.

Parade is both the subject of the clause and also the recipient of the action—the direct object.

The same sentence, then, written in the active voice instead of the passive voice, would look like this: “Public safety officers kept the parade orderly.”

The subject officers, the ones who did the keeping, is a separate entity from the direct object parade, the recipient of the action verb kept.

The passive voice is not ungrammatical.

Sometimes, in fact, the passive voice can be quite handy. Imagine, for example, that someone in your workplace broke the brand new copier by using the wrong kind of paper. It is much more diplomatic to say “The copier has been broken” than it is to say “Frieda broke the copier.”

Passive verbs and passive sentences can be a liability.

Even though the passive voice can help us avoid pointing a finger at the person (or people or company or agency) responsible for unpleasant actions, that notion itself can become a writing pitfall. Consider these passive-voice sentences, for example:

Although the purpose of such sentences may be to hide the identity of the people who performed these actions, we aren’t really fooling our readers. Instead, we are conveying a detached and unconcerned tone, suggesting that we don’t really care about the consequences of those actions. The passive voice may, therefore, actually serve to alienate our readers.

Consider the improved tone of these active-voice revisions:

Particularly in the business arena, writers use the passive voice because they falsely assume that it sounds more professional. In truth, it usually sounds stuffy—even pretentious—and creates a barrier between the writer and the reader.

Avoid passive-verb phrases, and use the active voice instead.

Perhaps the most important reason to avoid the passive voice is that passive sentences are often awkward if not downright illogical and ambiguous.

Sentence 3 dimly suggests that “each participant completed two written reflections,” but its convoluted construction requires the reader to make such an assumption, perhaps after reading the statement several times. To be clearer, we should write, “On days two and six of the workshop, each participant completed two written reflections connecting course content to personal experience.”

Sentences 4 and 5 would also be both clearer and more readable in the active voice:

One final reason to avoid the passive voice is that it often fails to tell us who performed the action expressed by the verb. Such sentences create mental images with key pieces missing.

For example, someone reading the sentence “The meal will be prepared in the banquet hall” will have a difficult time picturing a meal being prepared by no one in particular.

If we revise the sentence, however, and insert the agent for the action, the reader sees a much clearer, more complete image: “Three chefs from the local culinary school will prepare the meal in the banquet hall.”

Good writers aim for readers to see exactly what they want them to see. The active voice paints a more concrete, vivid picture in the mind of the reader and thus enables the writer to communicate more effectively.

Here’s a short (less than five minutes) video lesson on the passive and active voices, and beneath the video is a quick quiz to test your understanding:

TEST YOURSELF: The following sentences are written in the passive voice. Rewrite them using active-voice verbs. Follow these steps: