Myself (and Other Reflexive Pronouns)

Elsewhere on this site, we talk about using I and me correctly. This article addresses the appropriate use of myself and other reflexive pronouns.

It’s not uncommon to hear someone use myself as a subject in a sentence, such as in “Anna and myself are going home.”

When we remove “Anna and,” it’s easy to hear that “Myself is going home” doesn’t sound right.

The grammatical reason is that reflexive pronouns should never be used as subjects. “Anna and I are going home” is appropriate because in this sentence we need a subject—we need the pronoun I.

So when do we use reflexive pronouns, the ones that end with –self  or –selves (myself, yourself, himself, herself, itself, yourselves, ourselves, themselves)?

Here are three points you need to know:

First, Reflexive Pronouns Can Be Objects but Never Subjects

Reflexive pronouns serve as objects of verbs, verbals, or prepositions:

Second, Reflexive Pronouns Can Intensify Any Noun or Pronoun

When reflexive pronouns serve as intensifiers, they function like appositives, words that rename other words:

As we can see in the second and fourth sentences, the reflexive pronoun does not have to be right next to a noun to intensify it.

Third, a Reflexive Pronoun Must Always Refer to the Subject of Its Own Clause

Three of these four sentences use reflexive pronouns incorrectly:

Many people use myself when they aren’t sure whether to use I or me. (Go here for an article on that subject.) 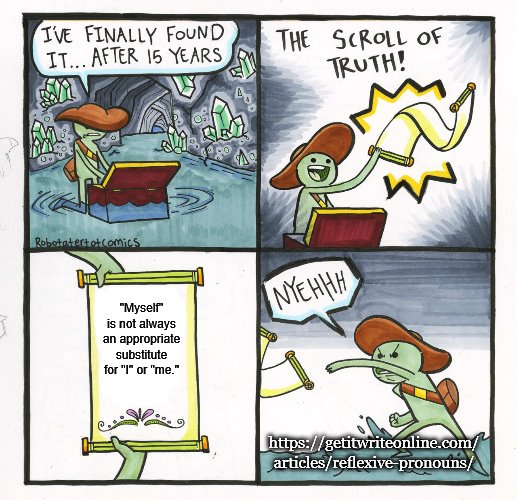