Colons (and How They Differ from Semicolons) 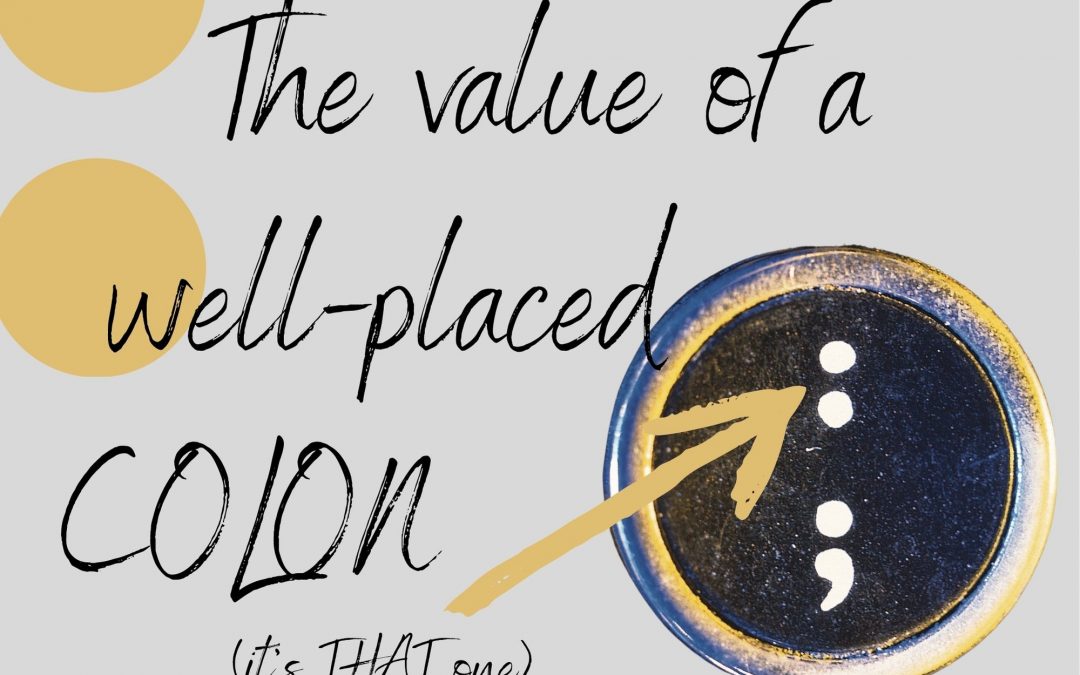 Recently I came across two expressions sorely in need of a well-placed colon. The first appeared in the Washington Post*:

Although the vaccines remain remarkably effective, the virus has bountiful opportunities to find new ways to evade immunity. Most of the world remains unvaccinated.

Had the writer used a colon after the first sentence, the reader would have known immediately that “the virus has bountiful opportunities to evade immunity” precisely because “most of the world remains unvaccinated.” But without the colon, the reader must make that logical—and critical—connection. Next I stumbled across the words to a favorite song, “The Riddle” by Five for Fighting. Written in verse form, the lyrics—as is often the case with poetry—contain no punctuation at all (at least not in versions found online).

Of course, song lyrics—like other poems—often take poetic license with punctuation. But with all due respect to singer-songwriter John Ondrasik, a well-placed colon would enhance the refrain in this fine song: “There’s a reason for the world: you and I.”

In clarifying that the phrase “you and I” is an appositive for the word reason, the colon underscores the central idea of the song: you and I are the reason for the world.

In both of these examples, the reader will likely figure out the intended meaning, but as writers, it is our job to make the meaning as clear as possible for the reader—and to do so as quickly as possible. The colon can help us do both.

Far too many writers ignore the colon altogether, unsure of how it works. Others confuse the colon with the semicolon or insert it in places where it doesn’t grammatically belong. And writers are sometimes confused about whether to capitalize a sentence following a colon.

This article was written to give you the confidence you need to add the colon to your writer’s toolbox.

How Much Do You Already Know?

Let’s start by finding out what you already know. Can you spot errors in the use of the colon in any of the following sentences?

The first three sentences misuse the colon, while the last two are correct.

The Colon vs. the Semicolon

Sentences 1, 2, and 3 misuse the colon, then, because in each case the colon follows a group of words that is logically incomplete. (Of course, semicolons can also be used between items in a list when one or more of those items includes a comma—read more here.)

We can see clearly in each of these examples that critical information is missing and that these are not independent clauses. We need neither a period nor a colon in such constructions:

Sentences 4 and 5 correctly use the colon because the information before the colon in each case is logically complete; that is, it is an independent clause, capable of standing alone as a sentence.

Say It Out Loud

What Follows a Colon Does Not Have to Be Independent

In sentence 5, the colon is followed by a list, which is also a phrase:

Notice that while the independent clause in each of these sentences is complete grammatically (that is, we could put a period after the words address and proposals), it still leaves us without details: what is the address, and who are the award recipients? The colon is appropriate because the list in each case gives us the information that the independent clause withholds.

The situation gets a bit more complicated when we have two independent clauses and have to decide which mark of punctuation, the colon or the semicolon, is more appropriate. Consider these two sentences:

Both sentences contain two complete thoughts—two independent clauses—but the relationship between the two clauses in each case is quite different. In the first sentence, the second clause merely adds to the thought expressed in the first clause. However, it does not answer the question hinted at in the first clause; we are still left to wonder about the nature of John’s problem. In the second sentence, the relationship between the two independent clauses is different: the second clause provides the information hinted at in the first. That is, it reveals the nature of John’s problem.

Using the Colon Before Some Direct Quotations

Even when the quotation is not an independent clause, if a sentence precedes the quotation, then the colon is a better choice than a comma. Consider this example:

The Chicago Manual of Style—my style manual of choice—adds that the colon is often used before quotations longer than one complete sentence, even when the introductory text is not an independent clause. Here is an example:

Capitalization after the Colon

With a few exceptions, most style books agree that if only a single independent clause follows a colon, we should not capitalize the first letter. Of course, as is often the case, exceptions do exist: we capitalize absolutely in “The sign at the campsite left no room for ambiguity: “Absolutely no littering!” because it is capitalized on the original sign. Also, if the colon is followed by a complete sentence that is also a quotation, we would capitalize the first word. And if more than one sentence follows a colon, we should start each with a capital letter.

Colons in Other Situations

Remember that just because a list is vertical (numbered or bulleted) does not mean it needs a colon to introduce it; we still need an independent clause before the colon. I explore this topic in detail in the article on this site titled “Vertical Lists.” And of course, we sometimes use colons after phrases that serve as headings, but here we are talking about the proper use of the colon in sentences.

Add or delete colons where appropriate in the following sentences:

*The irony is not lost on me that the title of the Washington Post article from which I took the quote at the top of this post is misused, according to the guidelines here. Keep in mind, though that the Associated Press style guide, which governs journalism, is an outlier on a number of issues, including the use of the colon. See the article about style guides elsewhere on this site for more details. One has to be a subscriber to read the article, but here is the citation: “In this summer of covid freedom, disease experts warn: ‘The world needs a reality check.’” (17 July 2021)