“GET OFF MY LAWN!” A Curmudgeon’s Rant about Sloppy Writing and Thinking 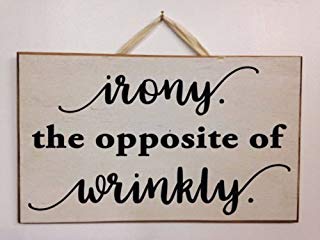 One of my favorite pastimes is to look for continuity errors in movies and television shows. I take great pleasure (rather embarrassingly) in noticing that a character’s wine glass shifts positions as shots change or that a medieval knight is wearing a wristwatch. Writing isn’t the only place where we sometimes get sloppy.

The good news is that I am never at a loss for entertainment; the most meticulous director blinks from time to time.

I am similarly mindful of those situations in which writers and speakers use words illogically or incorrectly. In these cases, I am more likely to be irked than amused.

The following is this old curmudgeon’s relatively short and idiosyncratic list of some real nerve graters.

Forte (correctly pronounced for-TAY) is an Italian word for “loud.” The original name of the piano, for example, was piano-forte, which meant, curiously, “soft-loud.” Long ago we dropped the forte.

The misuse of the word ironic is the bane of English professors. Irony occurs when something happens contrary to what is expected and usually with amusing or shocking results.

A spectacular example is found in the story “The Gift of the Magi” by O. Henry in which a young woman sells her long, luxurious hair to buy a chain for her husband’s prized pocket watch. The husband, however, sells his pocket watch to buy his wife—you guessed it—a set of combs for her long hair.

For examples of events that are unfortunate but not ironic, listen to Alanis Morissette’s song “Ironic,” in which she uses the word ironic wrong every time. (And her repeated misuse of the word ironic in a song titled “Ironic” is, well, ironic, indeed.)

I promised to keep this list short. I will, however, leave you with a list of additional bloopers that we will explore in a future article:

If you don’t believe that all of these expressions are, in fact, malapropisms, you’ve “got another thing coming.”

Dr. Cooper has written two other articles on this site: “You’re Still on My Lawn” and “Begging the Question.”

Dr. Ron Cooper is a senior professor of philosophy at the College of Central Florida in Ocala, Florida. Also a novelist and poet, he recently won a Florida book award for his latest novel, All My Sins Remembered (https://www.goliadreview.com/the-catalog). In addition, he is an amateur bluegrass musician who challenges anyone to play and sing worse than he does. For more on fallacious reasoning, he recommends Nonsense: Red herrings, Straw Men, and Sacred Cows by Robert J. Gula.